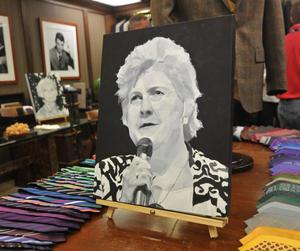 BRISTOL, Tenn. — In the portrait, her eyes are shining. She’s holding a microphone to her mouth, in the middle of announcing the last presentation she made at her beloved theater, the Paramount.

That moment, captured less than a week before Merle Dickert’s death, will forever hang in a place of honor in the theater. The roughly 16-by-20-inch portrait of Dickert, the former executive director of the Paramount Center for the Arts, was unveiled Thursday during an art show at Wm. King Clothiers, featuring Bristol artist Scott MacMorran.

“Merle said she wanted me to do one of her,” MacMorran said. “But she never sent me any pictures.”

He last saw Dickert two days before she died, and at that meeting the friends worked on planning an art show featuring MacMorran to raise money for the Paramount. Those plans were disbanded after Dickert’s unexpected death July 28. A mutual friend sent MacMorran the photo upon which he based the artwork.

MacMorran, who retired in March after 27 years in banking, has been painting for about four years, he said. Dickert encouraged him to pursue his artistic talents.

“She was a great advocate of the arts,” MacMorran said. “She was a big influence on arts in the area.”

He said painting the portrait, a black and white in oil, was an emotional process.

“It was a little tough because I was so shocked like everybody when I learned she died,” he said. “But it was good therapy. I got to stare at her face for five days while I made the painting.”

The presentation was a surprise to Dickert’s mother, Musser Warren, who said she was glad the portrait was appropriate to Dickert’s career.

“Her career and her friendships and her involvement downtown was the biggest part of her life,” Warren said, adding that family time with Warren, Dickert’s husband, Robert, and her brother, Jim Warren, was relaxing time for Dickert.

She said tributes to Dickert and gifts to the Paramount and the support shown to the center’s board of directors and staff since Dickert’s death has been overwhelming.

“This coming season is going to be superb,” Warren said.

“I was very impressed, especially how he does everything black and white,” King said. “It’s very clean; just a look I’ve always admired. It’s been fun for us because Merle’s done so much for downtown.”

But to Musser Warren, the portrait will always be one of her beloved child.

“She was my 22nd birthday gift and I’ve never received anything of that value since,” Musser Warren said. “This comes close today.”